The City of Smiles, Bacolod City, will once again pulsate with the latin beat and throb with the colorful and fun spirit of the Masskara Festival this October 2010. The highlights of the Masskara 2010 will be on October 17Â  to 19 and will feature a competition among various dance groups clad in very colorful costumes.

MassKara is coined from two words: Mass, which means “many, or multitude,” and Kara, a Spanish word for “face,” thus MassKara is a mass or multitude of smiling faces. 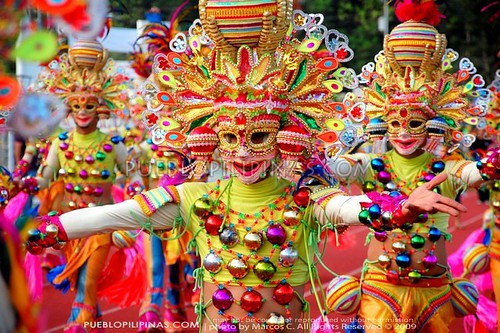 Daily fastcrafts or fast ferries ply the Iloilo City (Muelle Loney River Wharf) to Bacolod City (BREDCO Port). Travel time is 45 minutes to one hour. There are also roll-on roll-off (RORO) vessels or slow ferries plying the Dumangas Port to Bacolod City (BREDCO Port) daily. The van terminal going to Dumangas is located at Baldoza Terminal in La Paz, Iloilo City. Travel time from Iloilo City to Dumangas is 20 minutes and from Dumangas Port to Bacolod via RORO, it is around two and a half hours.