MoneySense Magazine has just placed Iloilo City at 5th spot in their list of best places to live in the Philippines on their March-April 2008 issue. The magazine attributes Iloilo’s strategic location, top schools, and natural wonders, among the deciding factors in including Iloilo in the list. 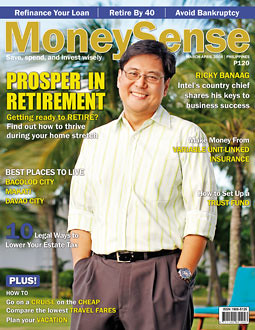 Full Ranking of Best Places to Live in the Philippines: 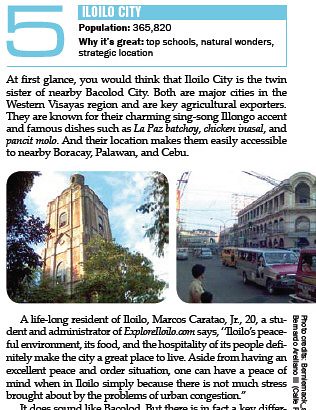 Heinz Bulos, writer of the article, contacted me and quoted the reasons why thought Iloilo was an excellent place to live in. We writes:

A life-long resident of Iloilo, Marcos Caratao, Jr., 20, a student and administrator of ExploreIloilo.com says, “Iloilo’s peaceful environment, its food, and the hospitality of its people definitely make the city a great place to live. Aside from having an excellent peace and order situation, one can have a peace ofmind when in Iloilo simply because there is not much stress brought about by the problems of urban congestion.”

Marcos says, “Ilonggos love to eat! And it shows through the variety of its delicious local dishes.” He adds adds, “Ilonggos generally prefer to have intimate gathering with friends and loved ones at home or in a place where they can enjoy each other’s company. Though once in a while, Ilonggos also like to party whether it is in a bar, club, during the town fiesta or its famous festivals.”

Iloilo is also richly endowed with mountains, waterfalls, rice terraces, caves, white sand beaches, and numerous islets. “It has a lot of hidden treasures worth exploring,” says Junelle Caravana, 26, a project manager for a software company and administrator of Iloilo Bloggers (www.iloilobloggers.com) who has been an Iloilo resident since birth. And it doesn’t cost a lot of money to have a leisurely life. Junelle shares, “Strolling in the mall – it’s what I do. And mostly, stroll around the Iloilo. I can’t get enough of its beauty and there are still a lot of places I need to explore.”

The feature about Iloilo ends with:

Iloilo is a fast-growing modern city with hotels, shopping centers, restaurants, golf courses, and convention facilities. As Marcos notes, “Iloilo is a modern city set in a laid back atmosphere. What I like best about Iloilo City is that it has amenities that every modern city possess within a stone’s throw from each other yet still retain its idyllic old world charm.”