The worst flood in decades has just hit Iloilo. More than 80% of the Iloilo City was affected and a large portion of Iloilo Province was devastated, damaging homes, agriculture, livestock and infrastructure. The widespread flash floods was caused by the large volume of rainfall from Typhoon Frank and to an extent environmental changes in the uplands and lowlands: global warming, deforestation, urban development. 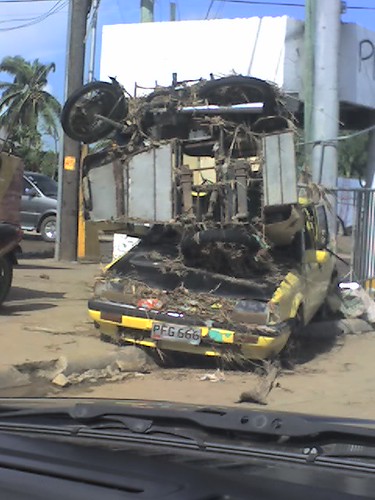 The flooding in the city was strong enough to drift away vehicles ranging from motorcycles to 4x4s. The photo shows a tricycle perched atop a car in Jaro District. Photo by Ashley Dagdag

Here are some Iloilo Flood Picture Galleries I found online:

Rescue Operations during the Iloilo Flood in Jaro District


Rescue Operations during the Iloilo Flood in Jaro District Slideshow


Iloilo needs your help! There are still thousands of families who lost their homes and are currently living in evacuation centers or in makeshift houses beside streets and bridges. These unfortunate people need food, water, clothes, medicines, etc… Any form of assistance extended to the affected families of Iloilo City will be deeply appreciated. Please visit this page for contact details: https://www.exploreiloilo.com/blog/typhoon-frankfengshen-ravages-iloilo-philippines/