Hundreds of Ilonggos gathered in the Iloilo River (Treñas) Boulevard during the eve of the new year to experience the 2011 countdown and pyromusical show. The event was a big success! The first ever fireworks display staged at the Iloilo River brightened not only the night sky but also set aflame the excitement and awe of the crowd. Nothing could be more perfect to celebrate the new decade for Iloilo than with a big BANG! 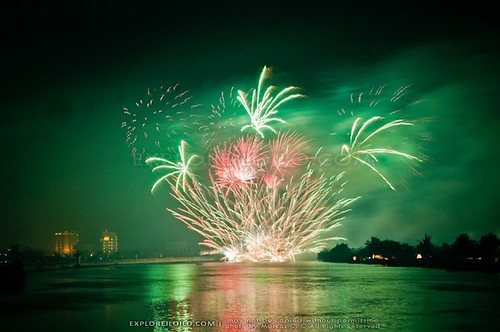 There’s a lot to watch out for in Iloilo this 2011. Rapid developments and investments pouring in the city and province is set to usher a new phase of Ilonggo Society thanks to the dynamism of the local governments, support from Ilonggos all over the world, and growing confidence among the investors in Iloilo.

Explore Iloilo would like to greet everyone a Happy New Year! and a big Thank You! for your support over the years. It’s the first time that Explore Iloilo breached the one (1) million annual pageview mark. Year-end stats revealed over 1,450,000 pageviews from January to December 2011 (124,000 views per month) or a 88.3% increase from last year. We’ll make sure to update you guys with all the happenings in Iloilo in 2011!

More photos and a video of the Iloilo New Year 2011 Countdown at the Iloilo River Boulevard to be posted soon.