In 1566, the Spaniards under Miguel Lopez de Legaspi came to Panay and established a settlement in Ogtong (now Oton, Iloilo). The Spaniards, who were in search of adequate food supply found abundant rice supplies in Iloilo. In 1581 the seat of Spanish Power was moved to La Villa de Arevalo, a sitio named in honor of Avila, in Spain.

Oton church, the blending of a Greek or Byzantine plan with Gothic and Classic elements, was one one of the architectural achievements of the colonial period. Too bad it’s grandeur can only be seen in pictures today, as it was destroyed in an earthquake in 1948.

By 1700 due to recurrent raids by Moro pirates, Dutch and English privateers, the Spaniards moved to the village of Irong-Irong where close to the mouth of the river they built Fort San Pedro.

The natives of Iloilo, called Indios by the Spaniards, preparing lechon or roast pig. 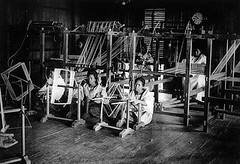 During the 19th century, Iloilo had a thriving weaving industry but it soon slowly died as cheap factory-made cloth flooded the Iloilo market during the “boom” of the sugar industry in Negros and Panay.