Here’s another sneak peak of Richmonde Hotel Iloilo and Richmonde Tower, the first of many projects to rise within the Iloilo Business Park by Megaworld Corp. The architectural render was released during the groundbreaking ceremonies last May 6, 2011 at the property site. According to Megaworld officials, both projects are slated for completion in the last quarter at 2013. 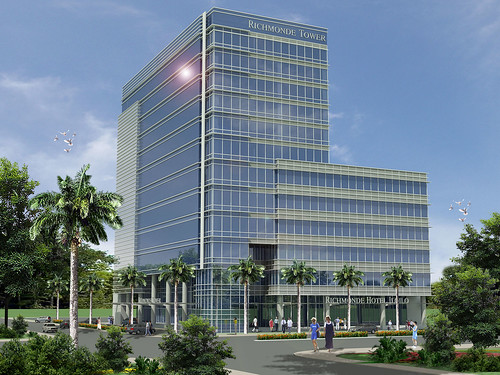 The 12-storey Richmonde Hotel Iloilo and Richmonde Tower will host 90 guest rooms and full-service amenities, which will occupy the ground level and 7th to 12th floor. In addition, The Richmonde Tower will occupy the second to sixth floors of the hotel, offering more than 9,000 square meters of prime office space for BPO locators. Its seventh-level amenities deck features play amenities such as a lap pool, children’s pool and fitness center, while the business center on the same level will include meeting rooms and a conference room.

Richmonde Hotel Iloilo is the third project of Megaworld under this hotel brand. The hotel is projected to serve businessmen and tourists who flock annually to witness Iloilo City’s historic and colorful festivals.

After the completion of the Richmonde Hotel, another hotel catering to the high-end market and a convention center will be developed. The newer and more upscale hotel is named “Le Grand Richmonde Hotel.”