StarTek International Limited, a Call Center and BPO company, is accepting job applications for technical support agents according to a hiring announcement posted at JobStreet.com.ph on January 4, 2013.

One of the requirements listed was that applicants must be “willing to work in Iloilo,” which suggests the opening of a StarTek site in Iloilo City. 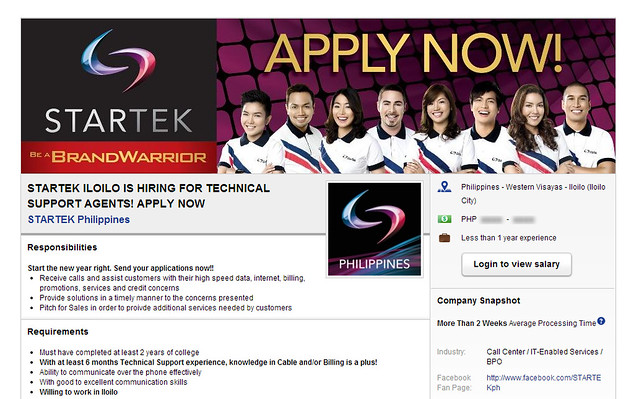 Screenshot of the hiring announcement posted at Jobstreet.com.ph

The company is one of the locators that is rumored to occupy one of the BPO office buildings at the Iloilo Business Park developed by Megaworld Corporation. The company has not yet issued an official announcement on the matter.

Two BPO office buildings are currently under construction at the Iloilo Business Park. Both buildings are expected to be completed by the third quarter of 2014.

StarTek is a business process outsourcing company that was founded in Greeley, Colorado in 1987. The company runs three existing sites in the Philippines. Their first office in the country was established in Makati in 2008, which was followed be their Ortigas site in 2010, and then their third site in Angeles in 2013. StarTek is the 24th biggest BPO firm in the Philippines based on 2012 revenues.

Interested applicants can send their resumes at JobStreet.com.ph or connect with the company through StarTek Philippines Facebook page.