Better watch out for a special concert by local Ilonggo bands with females as their front man err… woman rather. This May 31, 2008, Headtone Music Philippines (HMPh) present “Women of Rock“, a concert featuring Iloilo’s Six Pounder and Bacolod’s Kill Sofia with performances of Podigy of Eve, Maidens of Jah, Laneaia, Brews, Cuppy Cake Dolls, Anhedonic Paranoia, and more!. 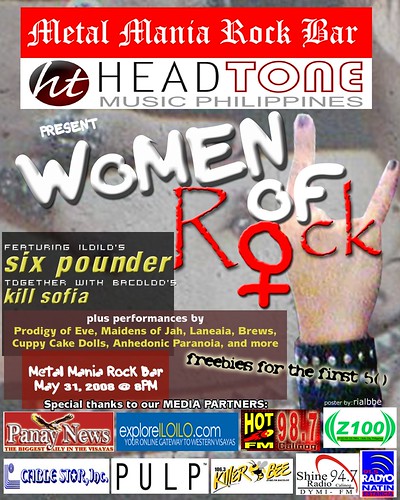 The “Women of Rock” concert will be held at Metal Mania Rock Bar (Formerly Pier 16), located along Diversion Road. The event will start at 8pm, there will be freebies for the first 50! Gate Damage is P75.

Headtone Music Philippines is a group of Ilonggo music enthusiasts that aim to promote the growth of the independent music scene, to give unsigned artists a chance to spread their music and help Philippines make a name through its very own homegrown talent. With the aim to promote the local music industry of Iloilo, ExploreIloilo.com has opened a Iloilo Music Guide ), where we will be featuring Iloilo’s music scene. There’s a quick link posted at the main menu in the head part of this website.