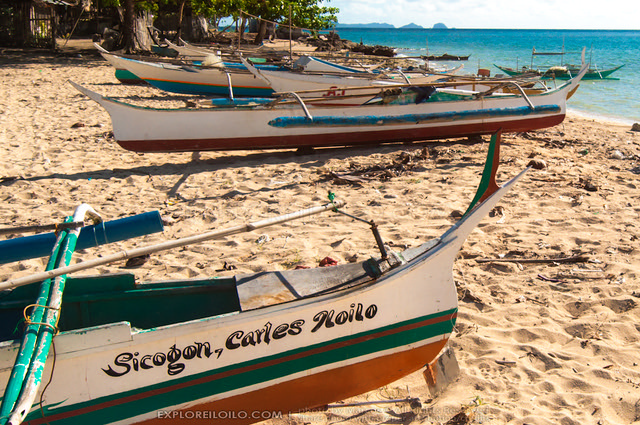 Sicogon Island is one of the many beautiful attractions that grace the waters of Northern Iloilo. Sicogon became a popular tourist destination during the 70s and 80s because of the high-end resort suitably named “Sicogon Island Resort” operating in the island.

At present, there may not be any luxurious accommodations or amenities in Sicogon but travelers can still visit the island to enjoy its picturesque sandy beaches, virgin forests, and alluring waters.

The sandy beach lining the coast of Brgy. Buaya is (arguably) the best swimming beach in Sicogon Island. It was once the setting for the seaside pavilion of Sicogon Island Resort.

The opulent structures of the resort are long gone. Instead, tall coconut trees and nipa hut dwellings of locals now dominate the landscape. 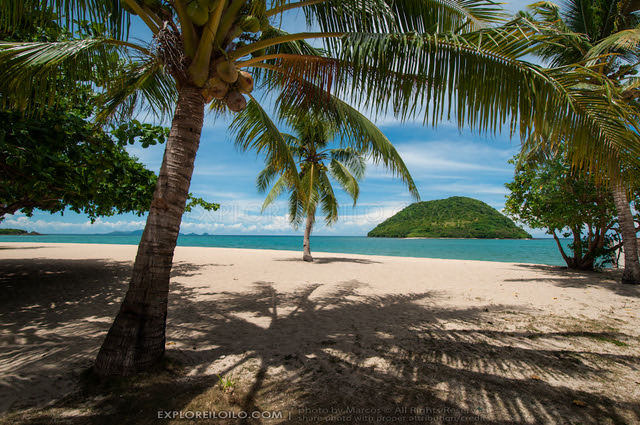 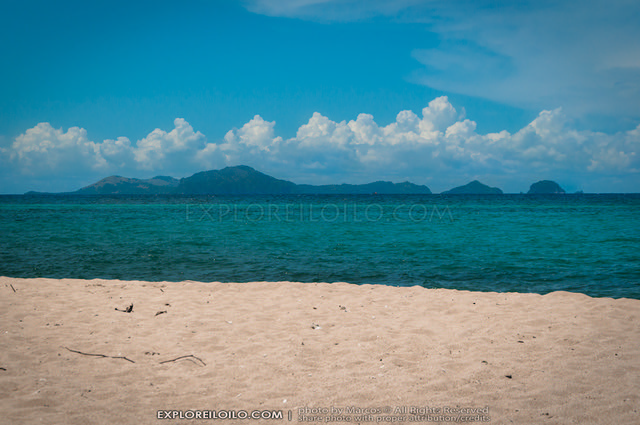 The main cluster of the Gigantes Islands can be seen from Brgy. Buaya side of Sicogon 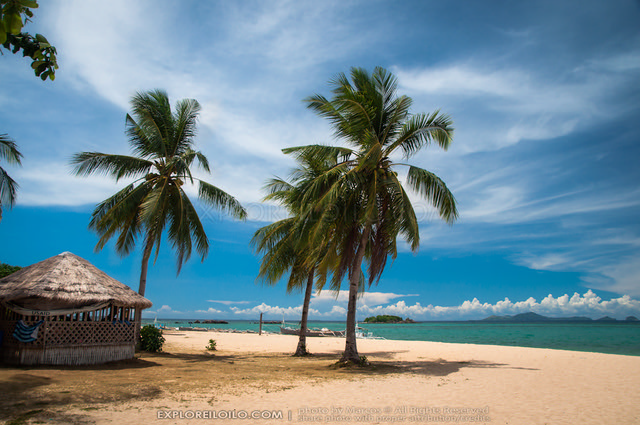 There are beach cottages near the middle part of the beach. These simple nipa hut accommodations are available for day trippers and “overnighters.”

The mid-part of the beach has the widest shoreline and has the lightest colored/finest sand. The sand in Sicogon has a slight yellow/orange tint. Walking further east or westwards, the coast gets more irregular. 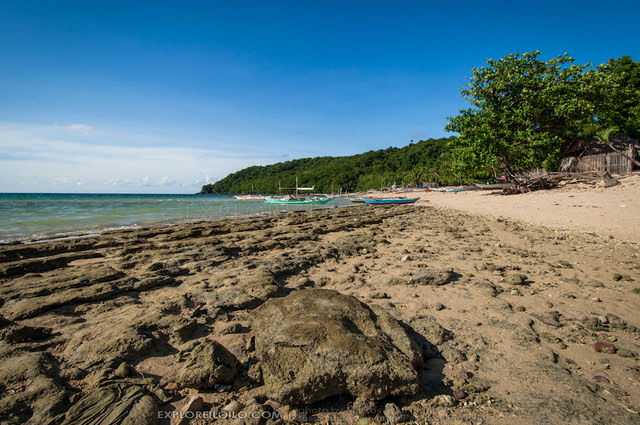 Rock formations at the eastern end of Brgy. Buaya Beach 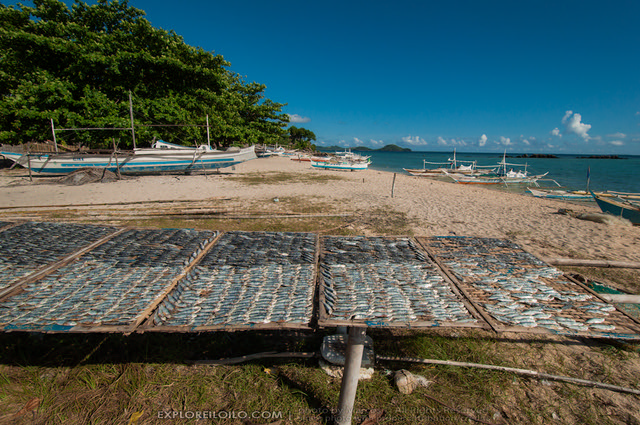 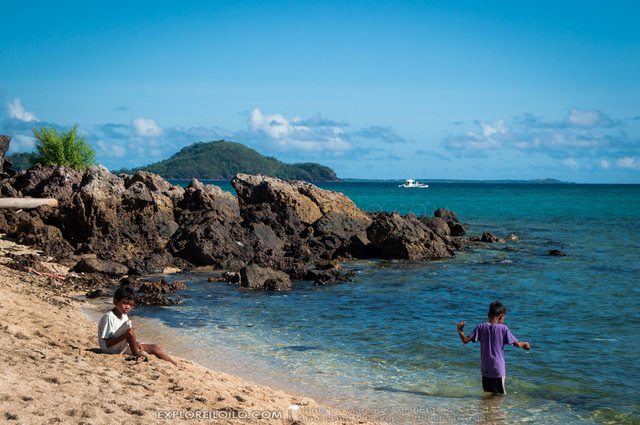 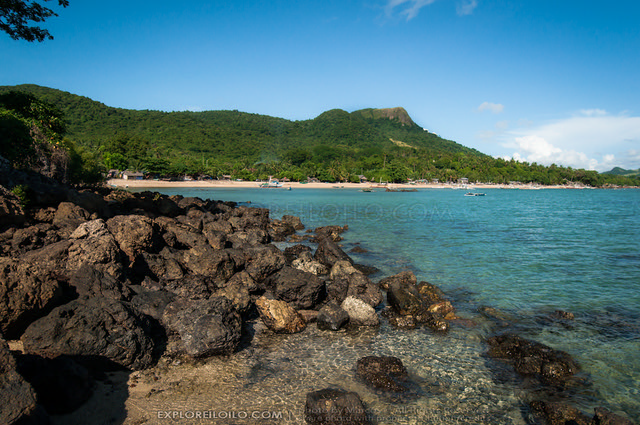 View of the eastern part of the beach in Brgy. Buaya. The bare rock summit of Mt. Opao is visible in the photo.

There is a popular notion that a “white” sand beach in Sicogon is longer Boracay’s 4-kilometer White Beach. Satellite images in Google Maps show the northeastern coast of Sicogon Island (where Brgy. Buaya is located) has the longest chain of sandy beaches but it only measures around 3.5 kilometers in total.

This coast has a very long sandy stretch but it is divided by rocky areas. Sicogon locals attest that the beach of Brgy. Buaya used to have a longer and much wider shoreline. Unfortunately, a significant volume of sand was washed away by devastating waves during Typhoon Frank (Typhoon Fengshen, 2008). While reviewing old photos of Sicogon, the shoreline indeed looks much wider. 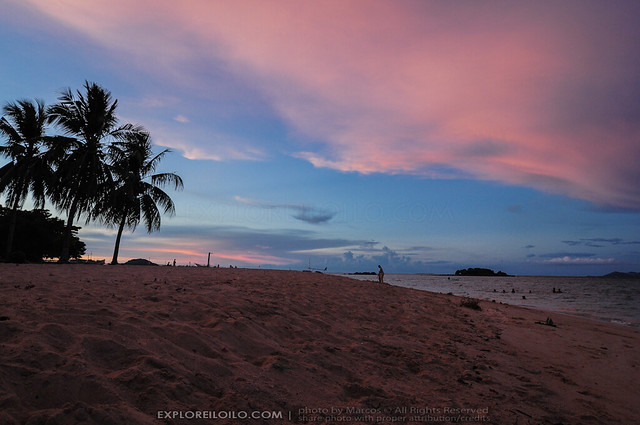 Brgy. Buaya has an excellent sunrise view. Early mornings are definitely something to look forward to for travelers spending the night at the beach. Sunsets are also visible at the island’s western side, which is  easily accessed by (single) motorcycle. 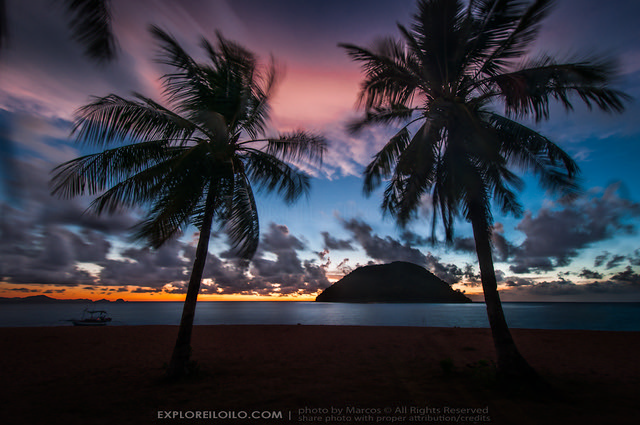 Tumaquin is a smaller island sitting off the coast of Brgy. Buaya. It can be accessed by boat or by foot only during low tide. Excellent snorkeling and diving spots can be found near Tumaquin island. 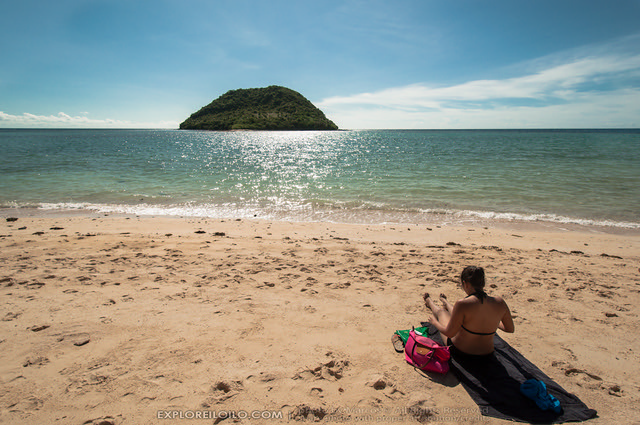 Tumaquin Islet lying of the coast of Sicogon

The waters between Sicogon and Tumaquin Island have the most visually alluring colors. The mixture of light emerald green, laguna blue and deep blues is irresistibly inviting for any first time visitor.

There’s a small off-shore islet nearby that is perfect for swimming and snorkeling. 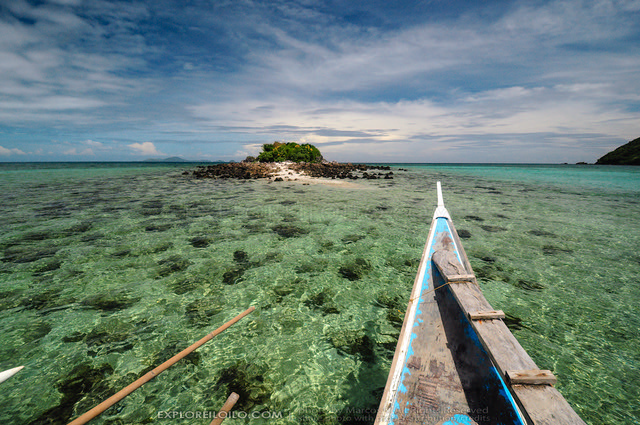 Islet with a rocky shore near Tumaquin Island and Brgy. Buaya, Sicogon mainland

Mt. Opao, recognizably crowned by a bare rock summit, dominates the landscape of Sicogon Island. The lower third the mountain is thickly covered by lush forest that is teeming with wildlife. The clean natural spring of Mr. Opao is the main water source of the island.

Mt. Opao’s summit can be reached after a 1 to 2 hour hike. Locals are willing trail guides for visitors who want to conquer the mountain and enjoy the magnificent views overlooking the islands of Northern Iloilo. 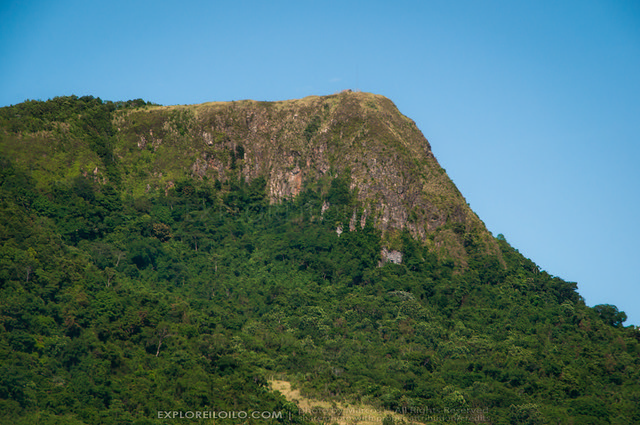 There are inland roads that connect Brgy. Buaya to the other parts of the island. This narrow mix of concrete and gravel/dirt road is passable,  at most, to single motorcycles.

Along the road to Brgy. San Fernando is an airstrip, which was frequently used to transport affluent guests to Sicogon Island Resort. Light aircrafts can still land at the airport, although, ground navigation facilities are lacking. The Sicogon Island Airport (IATA code: ICO) runway is 1 kilometer (3,281 feet) in length and is spread over the even land northwest of Mt. Opao. 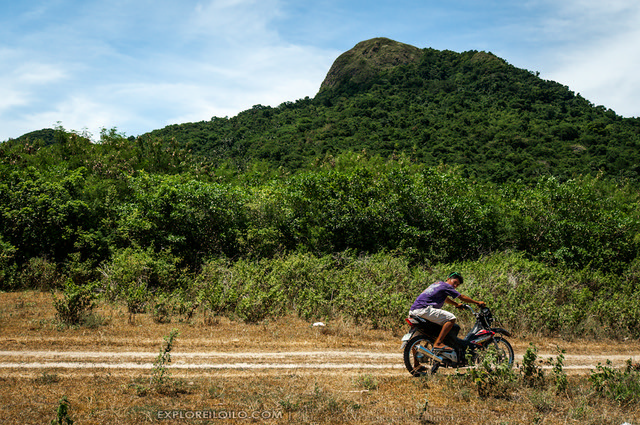 A trail from the airstrip leads to the main site of the Sicogon Island Resort. The grand pavilion and well-tendered grounds of the resort are destroyed and have been overrun by wild vegetation. The curious visitor can still see remnants of its granduer such as massive structural columns peering into the forest canopy, concrete pathways winding through the undergrowth, and a charming swimming pool filled with lotus pods. 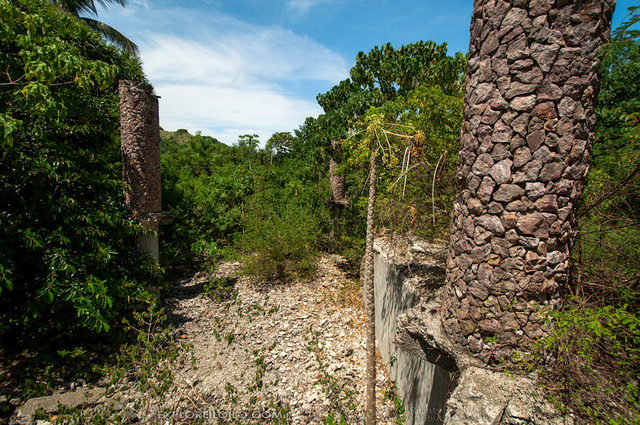 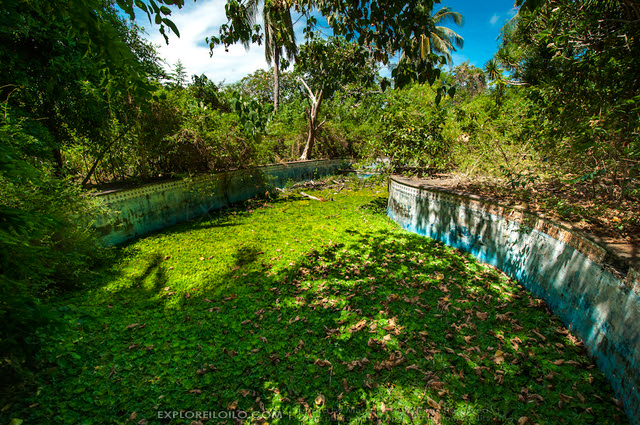 Located 30 minutes away by motorcycle from Brgy. Buaya is the long sandy beach of Sito Dapdap in Brgy. San Fernando, Sicogon Island. This is the first beach that greets visitors if taking the local boats from Estancia Port. The yellow-orange sand beach curves along one kilometer of Sicogon’s northwestern coast. 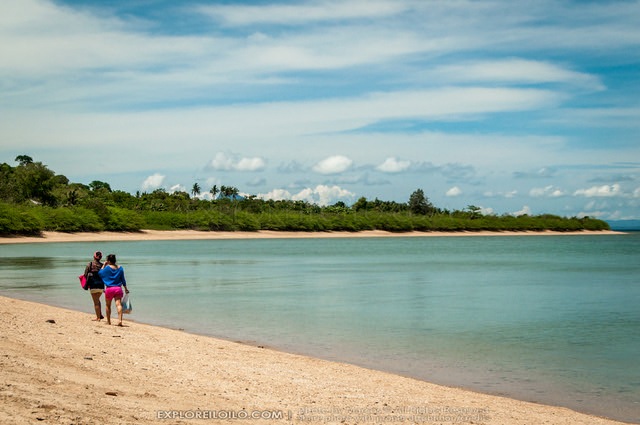 There are a lot more to experience in the other parts of Sicogon Island. The eastern and southern sides of the island are largely uninhabited. These parts are marked with deserted beaches and imposing rock cliffs. 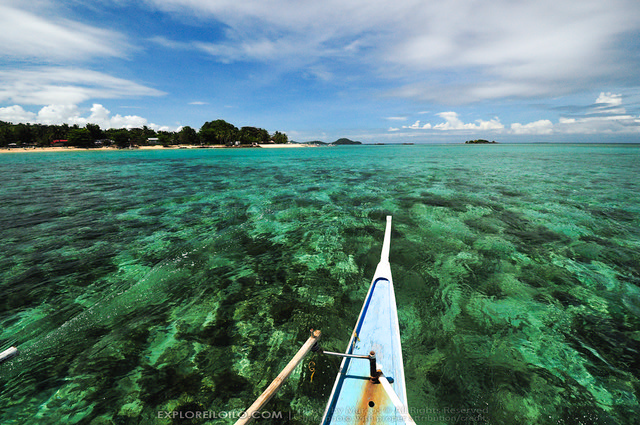 There are two beach cottages and a spacious (air-conditioned) hilltop accommodation in Brgy. Buaya, Sicogon Island. If staying at the beach cottage, the owners charge P150 per person per night. Each of these wooden cottages has a double bed (with mattress and beddings; good for two persons).

Contact person for accommodations in Sicogon Island is Ms. Merlinda (mobile #: +639109243074). Get in touch with her ahead of your scheduled visit. She may not be able to attend to your text/call immediately since cellphone signal in the island is very weak.

Buying food and other provisions in Estancia (before leaving for Sicogon) is recommended since the stores in the island are very limited. Visitors have the option of buying freshly caught seafood in Sicogon Island and have the locals cook it for them. 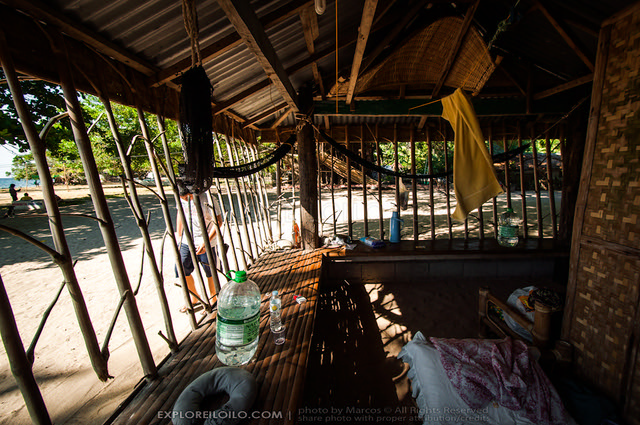 View inside one of the wooden beach cottages.

Estancia Fish Port (in the town of Estancia, Iloilo Province) is the most accessible jump-off point to Sicogon Island. Estancia is approximately 3 hours away from Iloilo City by local commute. Buses/L300 vans depart Tagbak Terminal in Jaro district, Iloilo City at least every hour from 5:30AM until the afternoon (P171 aircon bus fare). After arriving in the Estancia bus/van terminal, take a 15-minute tricycle ride (P8 fare) to Estancia Fish Port.

Alternatively, Estancia is just one hour away from Roxas City, Capiz. ALPS Bus Line also services the bus route from Pasay, Metro Manila to Estancia via the nautical highway (RORO).

The passenger pumpboat (motorized outrigger) ferry leaves Estancia Fish Port only once per day at 11:00AM. Look for the “M/V Princess Ann” pumpboat, which usually docks at the right side of the fish port (if facing the coast). The same ferry returns to the mainland from Sicogon Island at 7:00am. If you missed the passenger ferry, there are many pumpboats stationed around the port that can be chartered for P1,000 to P1,500 per way. Travel time between Estancia Fish Port and Sicogon is around 45 minutes. Fare is P30 per passenger. 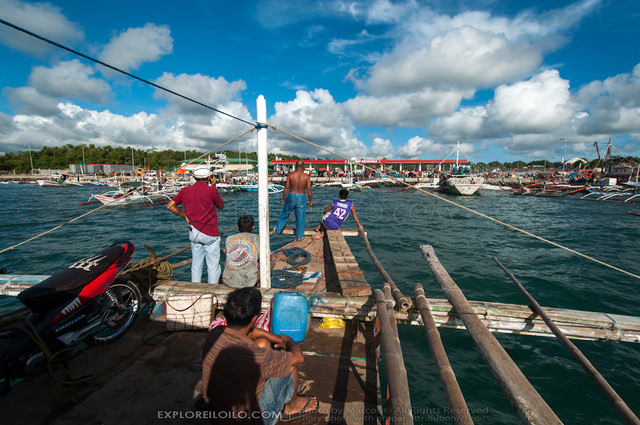 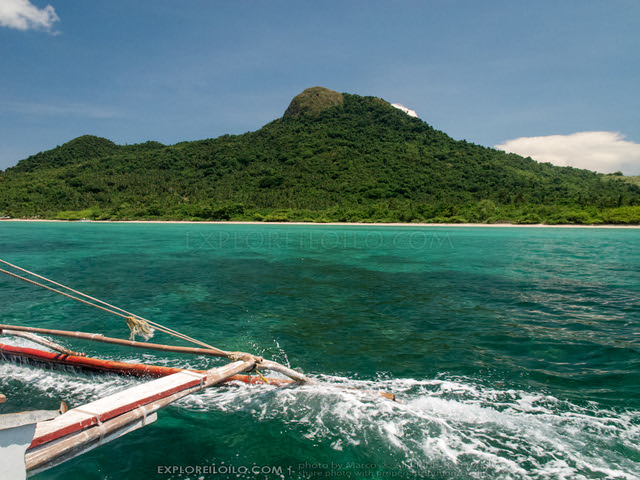 View of Sicogon on the regular passenger pumpboat (ferry).

Sicogon Island is positioned between two major island groups in Northern Iloilo: the Gigantes group of islands and the islands of Concepcion town. It is possible to rent a pumpboat and travel from Sicogon Island to these island groups. The rate will depend on the size of the boat you will be chartering and your negotiation with pumpboat operator. Prepare to around P3,000-P5,000 or higher.

Traveling on a pumpboat takes at least one (1) hour from Sicogon to Isla de Gigantes Sur and two and a half (2.5) hours to Pan de Azucar Island, Concepcion. It is possible to travel from Cadiz, Negros Occidental to Sicogon Island by speedboat. 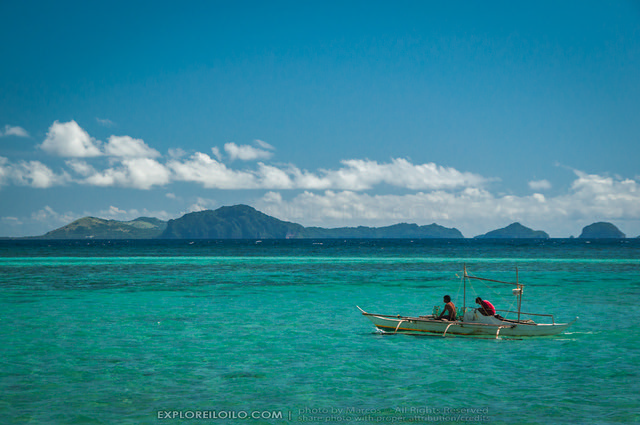 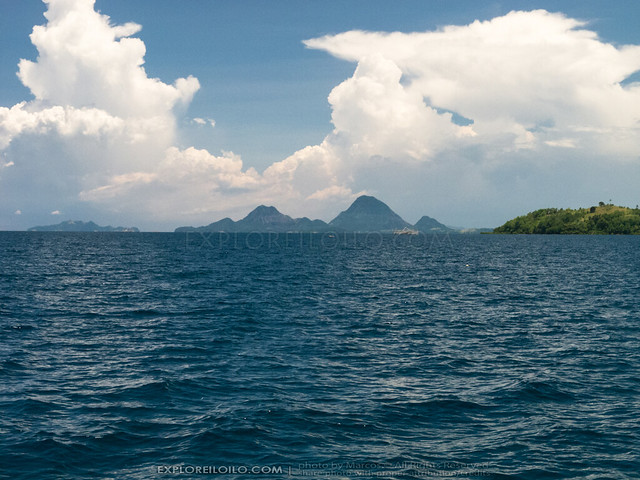 View of Pan de Azucar/Concepcion group of islands on the way to Sicogon.