Like most destinations in the Pacific, Iloilo’s coast is blessed with many beautiful beaches and off-shore islands that teems with scenic seascapes and a rich marine life. From Iloilo’s northern islands to the province’s southern beaches, paradise awaits the curious traveler. 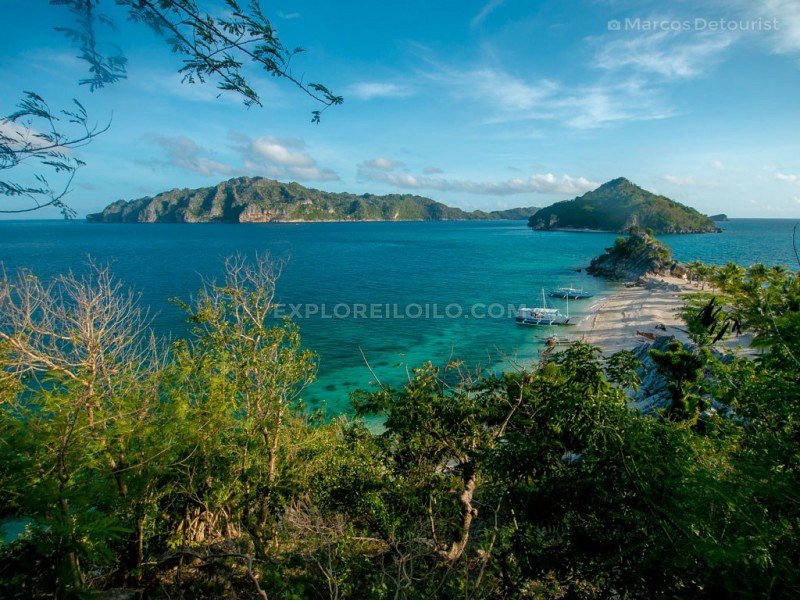 Picturesque beaches are scattered across the seafood rich waters of Northern Iloilo. The coastal towns of Carles, Estancia, Concepcion, and Ajuy are home to the best islands including Islas de Gigantes, Sicogon, Bulubadiangan (Sandbar), Agho, and Marbuena. Grey sand and pebble beaches also abound in the mainland coast of Balasan, Batad, San Dionisio, Barotac Viejo, Banate, and Anilao. Land travel takes up to 3 hours from Iloilo City to Carles, the farthest town in Northern Iloilo. From there, a ferry crossing takes up to 2 hours to get to the most popular islands. Discover more travel tips on Northern Iloilo.

All things to do in Iloilo, Iloilo travel guide. Head over to the southern coast of mainland Iloilo to find well-preserved marine sanctuaries in San Joaquin and peaceful gray sand beaches in Miagao, Guimbal, Tigbauan, and Oton. They might not be as popular as Northern Iloilo’s, but they are great to visit if you’re looking for a peaceful beach setting that can be reached more easily from Iloilo City. They are also a nice stopover if you’re planning to go overland to Antique. Travel time to San Joaquin, the farthest town, is around 1 to 1.5 hours. Discover more travel tips on Southern Iloilo. An overlooking view of Gigantes Islands.

Gigantes is a remote group of islands that is part of Carles town in Northern Iloilo. They are currently the most popular island destination in the entire province and sought after for their pristine white sand beaches, mystical rock formations, and fresh seafood. The tourist circuit typically includes Cabugao Gamay Island, Antonia Beach, and Tangke, but there are a lot more islands and beaches to explore for adventure seekers. Travel time to Gigantes takes around 5-6 hours from Iloilo on a land and ferry connection. Discover more travel tips on Gigantes. Before the rapid rise of tourism in Gigantes, the islands of Concepcion were actually the better known between the two. There are 16 beautiful islands in Concepcion including Bulubadiangan (Sandbar), Pan de Azucar, Agho, Malangabang, and Baliguian. In addition to inviting white sand beaches, the area is quite special because of the scenic presence of majestic Mt. Manaphag in Pan de Azucar Island that towers over the islandscape. Getting to Concepcion takes up to 2.5 hours from Iloilo City. From there, a ferry crossing to the main islands may take 30 minutes to 1 hour. Discover more travel tips on Concepcion. Sandbar of Marbuena Island in Ajuy.

If coming from Iloilo City, the islands of Ajuy are the most easily reached in Northern Iloilo. The most famous in this cluster is Marbuena Island, which is home to a lovely island resort. Ajuy’s other islands include the fishing community of Nasidman, and Calabazas where visitors can find the ruins of a Spanish-era lighthouse ruins. Travel time from Iloilo City to Ajuy mainland takes up to 1 hour. Then, it is another 30-minute ferry crossing to the islands. Discover more about Ajuy. Cabugao Gamay is a small island located two kilometers off the coast of Isla de Gigantes Sur in Carles, Iloilo. Seen from afar, its peculiar shape and inherent beauty is sure to attract the curiosity of most travelers. An easily conquered foot trail leads to the top of a hill that provides a gorgeous view of the island’s white sand beach and emerald green waters. Getting to Cabugao Island takes up to 45 minutes by ferry from Gigantes Norte Island where most resorts in Gigantes are located. Read more about Cabugao Gamay Island. A beautiful white sand beach found at a secluded corner of Gigantes Sur. The waters surrounding Antonia turns into a mesmerizing turquoise color under sunny morning skies. It is an excellent place for swimming, picnics, and beach camping. Getting to Antonia beach takes up to 45 minutes from Gigantes Norte. Read more about Antonia Beach. Gigantes Sur along with Gigantes Norte, are the two biggest islands in the area. Most of Gigantes’ major tourist spots can be found on or off the shore of the southern coast of Gigantes Sur. These include the placid waters of Tangke Lagoon, enchanting caverns of Pawikan Cave, white sand stretch of Antonia Beach, shifting sandbar of Bantigue, and the popular Cabugao Gamay Island. Read more about Gigantes Sur. Gigantes Norte is home to the biggest cluster of resorts in the Gigantes group of islands. In addition to being a popular base for island hopping tours, a few interesting spots could also be found within the island like the Spanish-era lighthouse ruins on its northern shores and Bakwitan Cave on the southern half. Gigantes Norte is around 1.5-2 hours from mainland Carles. 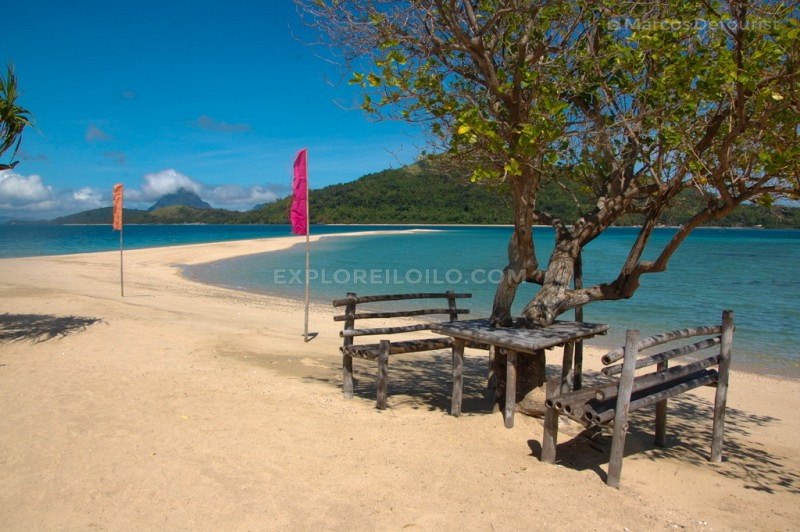 Bulubadiangan or “sandbar” island is a popular island attraction in Concepcion. Many local and foreign tourists visit the island for its clear blue waters and a long white sandbar that shapeshifts depending on the direction of the wind. There is a resort in the island called Sandbar Island Beach Resort, which is a good base to explore the other islands of Concepcion. A ferry crossing to Bulubadiangan takes around 30 minutes from the mainland. Read more about Bulubadiangan Island. Agho Island is a small parcel of paradise found in Concepcion. It has an extensive white sand beach and a sprawling coral garden. The island also has a shifting sandbar similar to Bulubadiangan. In terms of the fineness and whiteness of the sandy beach, Agho is perhaps the best in Northern Iloilo. What makes it even more beautiful is a gorgeous view of Mt. Pan de Azucar its surrounding islands. From mainland Concepcion, getting to Agho by ferry takes up to 1 hour. Read more about Agho Island. Sicogon Island in Carles is one of the many beautiful attractions in Northern Iloilo. It became a popular tourist destination during the 70s and 80s because of the high-end resort suitably named “Sicogon Island Resort” that operated in the island. Sicogon has many white sand and cream-colored beaches that had largely become clear of tourist crowds after the resort closed down. Currently, Ayala Land is developing Sicogon as a tourism estate with residential buildings, retail shops, forest trails, diving spots, an airport with a 1.2-kilometer runway and a jetty. A ferry ride to Sicogon from Estancia mainland takes around 1 hour. From Gigantes the ferry crossing should take up to 2 hours. Read more about Sicogon. Marbuena Island in Ajuy is home to Marbuena Island Resort. It also has a gleaming white sandbar that stretches more than a hundred feet away from the shore during low tide. A nature trail encircles the island, offering a panoramic view of the sea and surrounding islands. The trail continues inland to an old-growth forest filled with large flocks of migratory birds and fruit bats. Read more about Marbuena Island Resort.